Motorola released 1st generation Moto X with the collaboration of Google. The Moto X received great fame by the public . It was a great progressive turn in the history of Motorola after the Moto Razor series. The Android version was very close to the stock Google Android like nexus device. The device has some cool features like OK Google , no matter where are you sitting you can just wakeup your phone by a simple OK Google command. The device has another cool feature called active notification. Motorola finally released the 2nd generation Moto X called Moto X 2014. The device specs are high as compared to the old one. The device has officially announced in the mid of September.

The 2nd generation Moto X have AMOLED capacitive touchscreen have 16M colors. The screen size is about 5.2 inches having pixels about 1080 x 1920 at 424 Pixels Per Inch density . The screen is protected with Corning Gorilla Glass 3 .

The new Moto X is the super fast as compare to the old model . The latest version has the Qualcomm MSM8974AC Snapdragon 801 chipset speed is about Quad-Core 2.5 GHz Krait 400 . The device has Adreno 330 GPU for rich gaming experience. The RAM is about 2 GB with two versions of Internal storage 16 and 32 GB.

The device is running pure android 4.4.4 KitKat and surely be upgradable to Android L. Like previous version the device has same features are Active Notification, Motorola assists and Okay Google awaking commands with some latest tweaks .

The device has Li-lon 2300mAh battery . Surely this high end specs will give you a great time on this huge battery . It is difficult to predict the battery time for it because the device has just released. 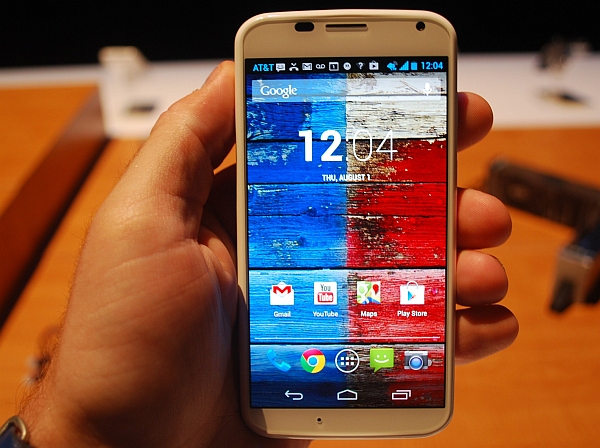